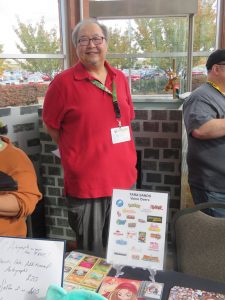 Ben Dunn was born on April 17,1964 in Pingtung, Taiwan. He immigrated to the United States in 1965. He settled in San Antonio, Texas where he grew up. In 1976 he went back to Taiwan where he discovered manga. In 1985 he founded the comic book publishing company ANTARCTIC PRESS to promote the manga artform. The first comic published was the title MANGAZINE.
In 1986 he created the anime inspired and best known comic, NINJA HIGH SCHOOL. It was picked up by Eternity Comics where is was published until 1992 when it returned to Antarctic Press and published until issue #175 making it one of the longest running independent comics. He created his next best known comic in 1994, WARRIOR NUN AREALA during the bad girl craze and was instrumental in the creation of the independent toy market.
Ben Dunn has worked with various companies over the years including MALIBU COMICS, ETERNITY COMICS, ECLIPSE, FIRST COMICS, NOW COMICS, MARVEL COMICS, DC COMICS, and various other publishers. He is however best known working with his original company ANTARCTIC PRESS. In the late 1990s he handed over the company to his brother, Joeming Dunn. He has also worked on TV shows like THE REAL GHOSTBUSTERS and EXO-SQUAD. He was also one of the animators on the WARNER BROTHERS film adaptation of P.K.Dick’s novel a SCANNER DARKLY.
Ben Dunn continues to work on comics including a revival of NINJA HIGH SCHOOL in celebration of its 30th year, a steampunk series THE STEAM LEAGUE and his new comic series SCIENCE IS MAGIC.
Currently, Ben’s creation, WARRIOR NUN was a NETFLIX series in 2021 with a season 2 on the way..
He is also editor at Antarctic Press.