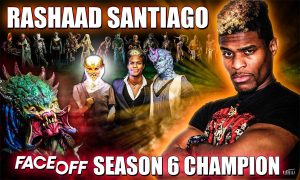 Rashaad Santiago, 33, specializes in Creature suits and Special effects make-up for Tv, Music Videos, and Film. Over the last 12 years, Rashaad has become a leader for artistic quality and value in the special effects industry. In 2013 he competed in the hit TV Series  “Faceoff” Earning the title of Champion of season 6.

Since his appearance he has gone on to do live makeup demos for Comic conventions, as well as travel internationally and teach the art of SFX makeup. His facility in Batavia, New York is where he creates his detailed creations. He works in many different styles, producing two or three-dimensional pieces, and a wide range of art that include sculpture, carpentry and metal work.

He has also crossed over to directing, he had a chance to direct his first feature “Beast of the Water” in 2016. He also created/produced and directed a 1950s stylized monster film called “Terror from Beyond Beyond”