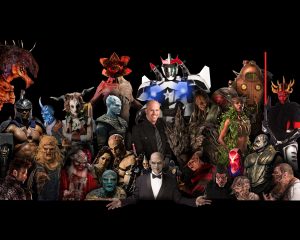 Rick Prince is a world-class special-effects makeup artist who has designed and created characters for clients around the world. Rick rose to international prominence on the SyFy Networkʼs competition series Face/Off – winner of the Critics’ Choice Television Award for Best Reality Series – Competition.

A rising talent in the world of film-making. Rick created his first feature film as writer, producer, and director titled LWA: All Saintsʼ Eve, earning a multi-movie deal which also included Rick as an executive producer and animatronic puppeteer in the award-winning PuppetMaster: The Littlest Reich.

Rick then teamed up with Rashaad Santiago (winner of Face/Off season 6) as content creators to develop their new film, Beast Of The Water, with Rashaad as director and Rick as writer and producer.